The History of Octagon Homes and Octagonal Structures

Octagonal homes first became popular in the United States in the late 19th century, but their recorded history dates back literally thousands of years. Throughout time, the octagon shape has been a symbolic architectural theme representing regeneration, rebirth and renewal.

Tower of the Winds in Athens, Greece is the oldest known octagon-shaped building and was built in approximately 300 B.C. Over the years the octagon has been used in constructing churches and temples for its many spiritual representations. When used as a dome it symbolizes joining the physical to the spiritual. The Palatine Chapel in Charlemagne's Cathedral located in Aachen, Germany, incorporates a double shell octagonal dome, which accentuates the elaborate mosaic on the ceiling.

Tower of the Winds: Athens, Greece(1)

The octagon represents a variety of meanings in many cultures and religions. In Buddhism it means completion, in Chinese it symbolizes good luck and completeness, in Hebrew it is the number of the Lord, in Taoism there are eight immortals, and in Christianity it denotes the eight beatitudes. While the octagon shape was prominent in the architecture of cathedrals and temples for its spiritual representations, it was not until the 1800s that it became fairly common in home building in the U.S. 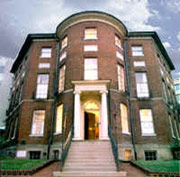 The first notable octagonal house, The Octagon, was designed and built in 1801 by Dr. William Thornton (the first architect of the U.S. Capitol) for Col. John Tayloe III. The Octagon still stands in Washington D.C. and serves as the headquarters for the American Institute of Architects (AIA). Octagonal homes became a popular architectural style in the 1850s due to the influence of Orson Squire Fowler's book The Octagon House: A Home For All, or A New, Cheap, Convenient, and Superior Mode of Building (1848). Octagon houses quickly caught on due to their unusual shape and appearance, which contradicted the typical ornate pitched-roof houses found during that time period. Additionally, people realized, through Fowler's book, that there were numerous advantages to an octagonal plan. 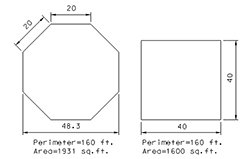 Octagon vs. square design (by Fowler) (4)

One of the advantages of an octagonal design is that the shape encloses space more efficiently than its counterpart, the square. An octagon has approximately 20 percent more space than a square with the same perimeter. Because this minimizes the external wall surface area, it decreases heat loss and gain. Additionally, an octagonal structure permits more natural light, aiding in the reduction of electric bills for illumination and heating in the winter and from a livability standpoint, octagonal designs allow for panoramic views and easier orientation on the building site. 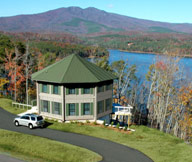 After the 19th century there was a decline in the popularity of this unique home style. However, in the past few decades it has been resurrected in contemporary octagonal designs utilizing post and beam building techniques. This new method of designing and constructing octagonal homes creates a structural membrane that is stronger than conventional stick-built designs. Expert in this application is Topsider Homes, who designs and manufactures its octagonal structures to custom specifications.

Topsider Homes began in the 1960s near Boone, North Carolina, by providing a solution to building on challenging mountainside sites. It created a new genre of building designs by marrying their unique pedestal foundation to an octagonal structure using a post and beam building system. The combination of these design and construction principles has created homes that are 'structural battleships' able to withstand hurricanes and earthquakes. 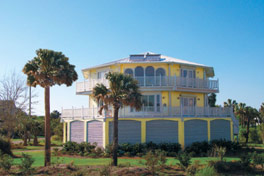 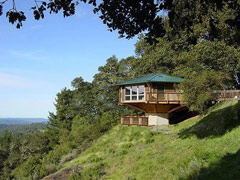 Topsider's unique octagonal homes permit 360 degree views making them very popular in vacation and scenic destinations, such as on the beach or the side of a mountain. They adapt to the terrain and climate of almost any building site and can be built on a wide range of foundation types, including pedestals, pilings, basements, slab and crawl-spaces. These octagonal designs are ideal for residential areas, retirement homes, home additions and more. To learn more about Topsider and to view their online house plans click HERE.

Whether you're just beginning to look at alternatives, or are ready to buy a new home we encourage you to visit our factory and model complex, we're located only 10 miles from Winston-Salem, North Carolina.