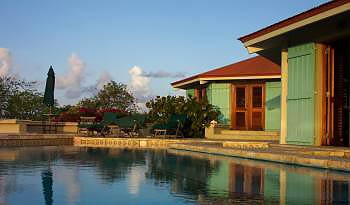 Pool side view of a small Topsider Homes resort in Puerto Rico that survived a direct hit from Hurricane Irene.

Vieques was blasted with sustained hurricane force winds for hours, while Irene stalled right on top of them.  Daly had left the island for the mainland, and with almost no time to prepare for the storm.  She received reports that the devastation on the island was extensive, and prepared for the worst, with the news that virtually every structure had sustained damage and many had been totally obliterated.

When she returned to Vieques several days later she was thrilled to find her Topsider Homes were unharmed, yet surrounded by devastation in every direction. “Words could not express how relieved I was to see my place virtually unharmed.  We felt so lucky.  We knew that our Topsider Homes were engineered to be hurricane resistant, but this was such a big hurricane and the island was pounded for so many hours by such high winds, we almost couldn’t believe our eyes.  I just had to call Topsider and tell them about this and share our gratitude for the great houses they sold us,” said Daly Reville.