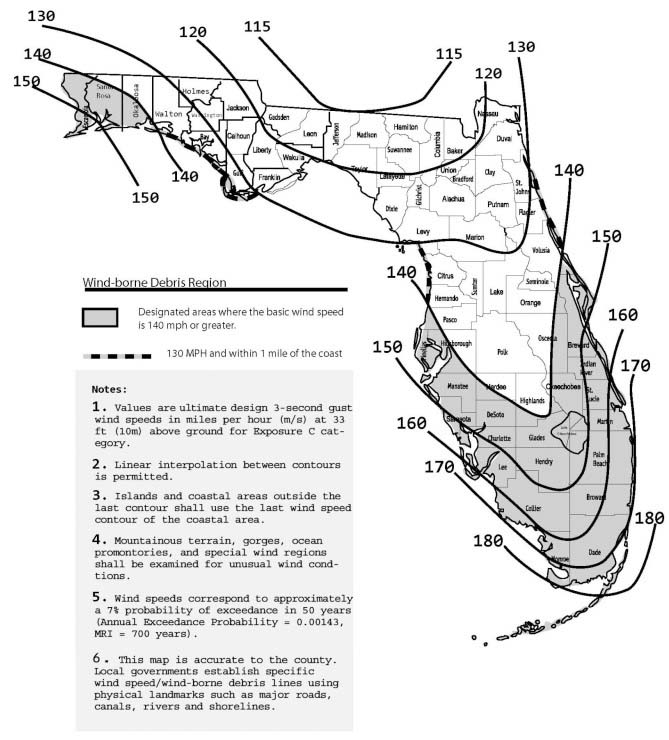 Florida’s residential wind and wind-borne debris regions are changing significantly in 2012.  The new requirements will be officially adopted on January 1, 2012, and effective March 15, 2012 – and these changes will cause new home construction costs to increase.  Plans submitted for permitting prior to March 15, 2012 may be “grandfathered” into the old requirements, so if you intend to build in Florida in 2012, getting started early could result in savings.  Many other coastal states and Caribbean countries who follow Florida’s lead on building codes will soon be implementing similar changes.

The map at right shows the new wind and windborne-debris regions.  The dark areas are those requiring high impact missile-resistant glass.  Most noteworthy of the changes is that the previous maximum windload requirement in Florida was 150 mph in The Keys.  The new code raises that to 180 mph and increases wind loads for many counties below mid-state from 100 mph to 140 mph and up. Additionally, areas now requiring much more expensive high impact, missile resistant windows have nearly doubled and are no longer primarily in coastal areas.

Topsider Homes has been building its post & beam panelized homes in coastal areas of Florida and throughout the eastern seaboard and Gulf for more than 40 years with homes that have withstood the worst hurricanes in history.  Our technical staff is well versed in these building code requirements and in dealing with local building departments and authorities throughout Florida and the surrounding states.  For more information contact Topsider Homes.